After two months off for summer: the blog is back! And big things have happened. 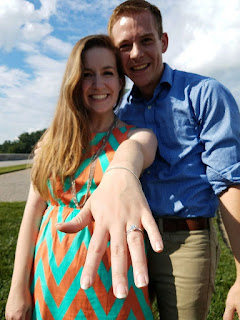 Jordan and Emily met when they were both hired on the BrookwoodKiDs staff at Brookwood Church in January of 2016. Through working together and seeing each other daily, it wasn't long before they realized how much they liked each other. After keeping quiet about their feelings for a few months, they finally started hanging out in groups of friends and realized that they wanted to be together.

Their first date was on a rainy night in August of 2016, with fajitas for two at Chuy's in Greenville and a game of Dutch Blitz while watching the Summer Olympics.

Jordan and Emily share a love for Jesus and adventure, and have made travel goals for their future together. They plan to visit all 47 South Carolina State Parks, as well as all 50 states, before they turn 50!

When you know, you know! Jordan and Emily knew early in their relationship that this was it. In May of 2017, Jordan secretly met with Emily's family to ask permission for her hand in marriage. Emily had no idea!

For the month of June, Jordan planned a whole month of fun Saturdays for the two of them. The first surprise Saturday was a beach day at Folly Beach, complete with kite flying, hunting for shark teeth, and dining at restaurants from Diners, Drive-Ins, and Dives. The second Saturday was a morning at the Greenville Saturday market, an afternoon at the zoo, and a fancy dinner before seeing the Lion King at the Peace Center!

For the third Saturday in June, Jordan had another surprise planned. But a few nights before our mystery trip, he received a phone call from his best friend, informing him that they had four free tickets to the Biltmore! Jordan expressed his desire to go with them, so he "moved" our plans to the next week so we could go.

Little did Emily know that Jordan had actually purchased those Biltmore tickets a month before, along with an engagement ring!

After a wonderful day with great friends exploring the Biltmore with an audio tour, the four of them took a stroll through the gardens and up onto the South Terrace. While posing for a photo with the house in the background, Jordan knelt down behind Emily, surprising her with the five words that changed both of their lives forever: "Will you marry me, Emily?"

Of course, she said yes, and they celebrated with their friends and Emily's family with dinner at the nearby Chili's.

Jordan and Emily are thrilled to start their life together with an intimate, small wedding at Table Rock State Park (checking another park off the list!) on October 8, 2017. 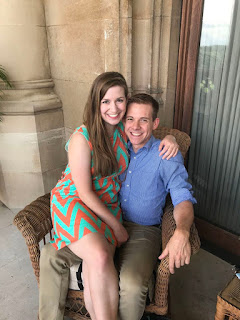 For more about us and our story, visit our wedding website here.
Posted by Emily Morgan at 6:51 AM